Together against Hatred and Walls 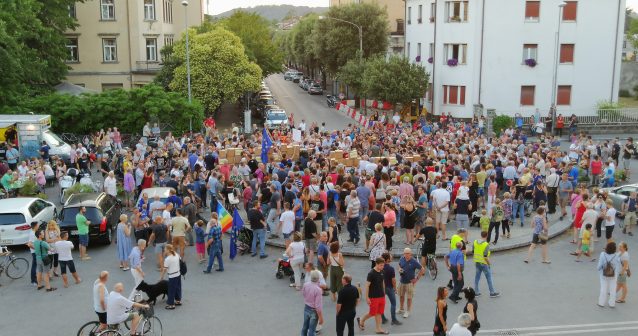 More than 500 people from both sides of the border gathered on the Europe square/Piazza Transalpina in reaction to the rumors of building the wall at the border between Italy and Slovenia. Political and civil organizations have joined forces in an event that wants people to respond to increasingly loud words about borders and divisions. With the massive participation, despite the heat and holidays, participants proved that they honestly support the idea of a borderless territory. The gathering was a relaxed and friendly meeting of citizens from both sides of the border. There were many hugs, kisses and hands-shaking on the square, European flags and hopes, but also the acknowledgment that such events would still be needed. At the end of the event, the participants symbolically demolished a cardboard wall on the mosaic, standing in a circle around the square and ended the gathering with loud exclamations: “Europe, Europe!”